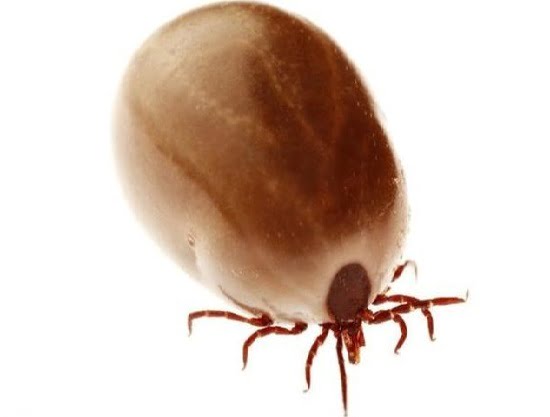 A tick is a transient blood feeding parasite requiring a host animal to complete its life cycle. A hungry tick will position itself on some vegetation in order to attach to a passer-by. It will spend long enough on the host to consume enough blood to grow or produce eggs before hopping off to lay them in the environment.. The tick then dies and the cycle begins again as the little nymph grows into an adult.

Apart from the fact that they are rather revolting little creatures, they can transmit bacteria, viruses and other parasites, affecting both companion animals and humans. Infections are transmitted in their saliva as the tick feeds or, on the odd occasion, after the tick is accidentally ingested! One well known tick borne disease in the UK is Lyme Disease, which is caused by the bacterium Borrelia burgdorferi. When an animal or human is first infected they will develop flu like symptoms, this is usually treated effectively if diagnosed early. However, if left untreated it can go on to affect muscles, joints, the heart and nervous system and can cause severe and long-lasting symptoms. The diagnosis is reached on blood testing the affected individual.

Babesiosis is carried mainly by the foreign or ‘exotic’ species of ticks. Babesia are microscopic parasites that live in red blood cells and can cause serious illness in both animals and people. In the acute form of the disease, Babesia cause sudden rupture of red blood cells resulting in a life threatening form of anaemia. In the subacute or chronic forms, animals are anaemic, lethargic and debilitated. Diagnostic tests often show kidney and liver damage caused by Babesia.

Ticks are generally dormant in winter, and become active to feed in the spring and early summer. As the summer progresses their activity reduces, depending on species, stage and habitat. However, some ticks can be active throughout the summer. There is a second peak of activity in the cooler autumn.

It usually takes 24-48 hours of being attached to their host to transmit an infection. However, when they first attach they can be very small and therefore difficult to see even with thorough daily checking of the coat. They can be found all over the body but generally prefer the thin skinned and hairless areas. All visible ticks should be removed at the earliest opportunity using a tick remover to prevent leaving the head and legs in! However, it is recommended that one should use an acaricide alongside regular checking in order to minimise the risk of Tick Borne Diseases. A suitable product should be used at least during the more risky times of the year and in high risk areas. High risk areas include woodland and rough upland regions including spaces near deer and sheep.

Please be careful as some tick control products can be toxic to cats. We advise that you talk to your vet about the products that are available and we will find an appropriate protocol that is safe and suited to the individual.

Want to join the discussion?
Feel free to contribute!

This site uses cookies. By continuing to browse the site, you are agreeing to our use of cookies.

We may request cookies to be set on your device. We use cookies to let us know when you visit our websites, how you interact with us, to enrich your user experience, and to customize your relationship with our website.

Click on the different category headings to find out more. You can also change some of your preferences. Note that blocking some types of cookies may impact your experience on our websites and the services we are able to offer.

These cookies are strictly necessary to provide you with services available through our website and to use some of its features.

Because these cookies are strictly necessary to deliver the website, refuseing them will have impact how our site functions. You always can block or delete cookies by changing your browser settings and force blocking all cookies on this website. But this will always prompt you to accept/refuse cookies when revisiting our site.

We fully respect if you want to refuse cookies but to avoid asking you again and again kindly allow us to store a cookie for that. You are free to opt out any time or opt in for other cookies to get a better experience. If you refuse cookies we will remove all set cookies in our domain.

We provide you with a list of stored cookies on your computer in our domain so you can check what we stored. Due to security reasons we are not able to show or modify cookies from other domains. You can check these in your browser security settings.

These cookies collect information that is used either in aggregate form to help us understand how our website is being used or how effective our marketing campaigns are, or to help us customize our website and application for you in order to enhance your experience.

If you do not want that we track your visit to our site you can disable tracking in your browser here:

We also use different external services like Google Webfonts, Google Maps, and external Video providers. Since these providers may collect personal data like your IP address we allow you to block them here. Please be aware that this might heavily reduce the functionality and appearance of our site. Changes will take effect once you reload the page.

The following cookies are also needed - You can choose if you want to allow them: