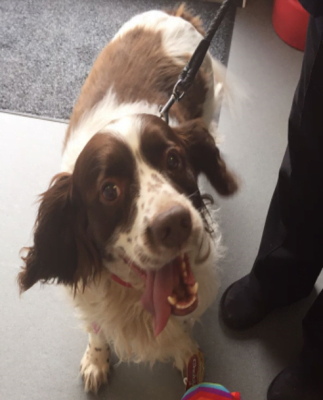 Late last year, Rip had been rather poorly. After being sick a few times, and drinking and urinating a lot at home, he had a blood test. The outcome was very high blood glucose, indicating diabetes!

Rip’s owner learnt how to inject insulin under his skin and started his medication. To make sure that Rip’s blood glucose was being controlled correctly, he had to come in for several glucose curves over the coming weeks. During these visits, he stayed with us for the day and had a small pinprick of blood taken every two hours to measure how his glucose levels changed after his insulin injection.

After little alterations to his medication to make it right for Rip, and trips back and forth to Molecare, his blood glucose finally started to behave. He is now doing well at home thanks to the dedication of his owner.

Rip was incredibly brave with all his visits. He started off a little nervous but his confidence improved each time, and he was always a gentleman; a true Pet Superstar!

Want to join the discussion?
Feel free to contribute!

Check out our Summer 17 Newsletter now!

This site uses cookies. By continuing to browse the site, you are agreeing to our use of cookies.

We may request cookies to be set on your device. We use cookies to let us know when you visit our websites, how you interact with us, to enrich your user experience, and to customize your relationship with our website.

Click on the different category headings to find out more. You can also change some of your preferences. Note that blocking some types of cookies may impact your experience on our websites and the services we are able to offer.

These cookies are strictly necessary to provide you with services available through our website and to use some of its features.

Because these cookies are strictly necessary to deliver the website, you cannot refuse them without impacting how our site functions. You can block or delete them by changing your browser settings and force blocking all cookies on this website.

These cookies collect information that is used either in aggregate form to help us understand how our website is being used or how effective our marketing campaigns are, or to help us customize our website and application for you in order to enhance your experience.

If you do not want that we track your visist to our site you can disable tracking in your browser here:

We also use different external services like Google Webfonts, Google Maps and external Video providers. Since these providers may collect personal data like your IP address we allow you to block them here. Please be aware that this might heavily reduce the functionality and appearance of our site. Changes will take effect once you reload the page.